The age old question. Now maybe you've only witnessed it in Hollywood. Prisoners lined up at the fence. Shirts off, tattoo covered muscles flexed out. A lot of you are probably pretty skeptical. I mean, aren't there no weights in prison? Isn't the food pretty much all fat and no protein? There are a lot of misconceptions about what life in the prison world is like, and how it would most likely inhibit a prisoner from attaining a certain physique or level of athletic ability.

Alright, so let me not mislead you. In a lot of prisons, there really are no weights. Prisoners in general population may have access to a yard or some kind of recreation area, but not to legit weights. No bar, no dumbbells.

Shiiiit.... even further research shows us that there are literally NO free weights in United States penitentiaries AT ALL. "In 1996, an amendment to an appropriations bill expressly prohibited the federal Bureau of Prisons from purchasing "training equipment for boxing, wrestling, judo, karate, or other martial art, or any bodybuilding or weightlifting equipment of any sort." Many states, including California, made the same decision, either by statute or policy. These days, whatever free weights you'd still find in U.S. prisons are decades old. (These are often chained to the walls, to deter thieves and prevent inmates from beating each other with barbells.)

Thanks to our dear late Justice Antonin Scalia, all equipment like this was banned. This was widely criticized as a bad move. We agree. Most prison wardens argue that idleness is the biggest threat to prison safety.

Think about it, you're already sitting in prison for an assault or robbery charge(or maybe because the justice system thinks marijuana is the devil and you were smoking a joint.... anyway). Your world is a jungle gym of other dudes who are testosterone-fueled criminals ready to pop off for anything at anytime.... is taking away a prisoners access to recreation a good idea? "It makes them more of a threat because of stronger muscles or something." Yea... he didn't actually say that but he said something pretty stupidly similar. The bottom line is... the man was a dumbass. May he rot in hell. Or maybe he took Satan's job? What are they lifting then? Themselves. That's right. Calisthenics is the only was to get your weight up in prison..... if we're talking about physical gains. There are a lot of ways to get money and drugs so don't despair!!! Yep, calisthenics. Good old fashioned push-ups, sit-ups, pull-ups, and then a crazy amount of variation. There are still bar sets in many penitentiary recreation areas. Have any of you ever heard of the Bar Brothers?

It's essentially a workout niche that follows the ideals of dedicated calisthenics training. These dudes are able to maneuver themselves around bar sets like nothing. Like literal orangutans. Well many prisoners do engage in calisthenic workouts a few times a week, there are guys dedicating massive amounts of time to this kind of stuff. They figure out ways to get real creative with it too. Body weight training is hailed by most fitness experts(really anyone who is a realist and not a vein pop) as the healthiest way to go about training. It's really the best kind of strength acquisition, as anyone can do it and its significantly safer than using weights if done properly.

This dude David explains what it's like to be a disciple of calisthenics in prison:

Alright... so no weights? Not the end of the world I guess.... It's certainly harder to get strong in the prison system only doing body weight, but it's doable. You may not gain as much serious size, but with dedication you WILL get stronger.

As we know, size is really more determined by how much you eat. In Prison, this is a factor because you're not the one who decides what or how much you can eat. Lets take a look at the macros. The Marshall Project has a great article on prison food and whats in it. Without getting to deep into the humanity of the prison system, let me just put the project findings into a nutshell.

There is a lot of variability across the country. There are mandates in certain states requiring that inmates are allowed 3 meals in a 24 hour period. This goes state by state, so in other states inmates may only get two meals per day. These states consider themselves "fiscally conscious." It seems however that fiscal intelligence is a substitute for morality. One case is noted in the article, in which the prosecution found Gordon County Jail in Calhoun, Georgia guilty of essentially starving their inmates. One man was said to have lost around 90 pounds during a bare few months long sentence in the prison system.
This is utterly baffling.

Its not unexplained though. The nutrition quality of the food being served is bad enough as it is. The majority of the food is empty carbohydrates. Many bodybuilders might call these "quick carbs." Stuff like bread or french fries. Quickly digestible, minimally complex. Comprised of mostly sugars and not very much starches or.... like we said... complex carbohydrates. Of course there are also servings of fruit, vegetables, proteins, or more complex carbohydrates. Much lower amounts in the ratio, however. Unfortunately I have to make sure you as the reader are factoring this in as a ratio, as the overall calorie count these dudes(and dudettes) are taking in is diminutive. Seriously.

Here's an example of the daily rations from Gordon County Georgia:

-1 cup of skim milk (not pictured)

-1 cup of cereal and a cup of 2 percent milk 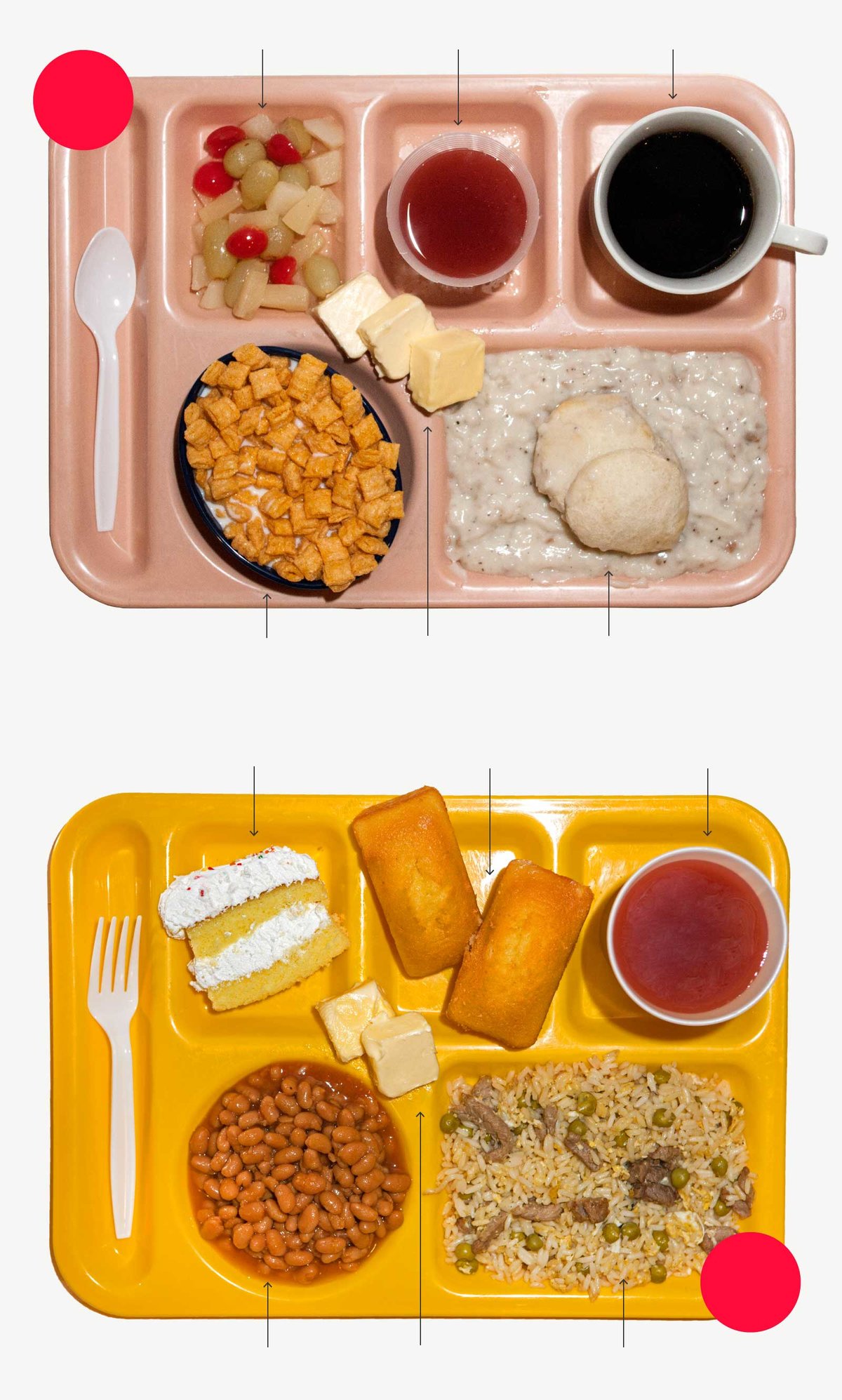 Overall, these meals were totaling about 2,800 calories a day. This was pretty average for most of the prison systems observed.

Some had a much lower calorie count, however.

In Morgan county Alabama, the daily calorie count was under 2000. 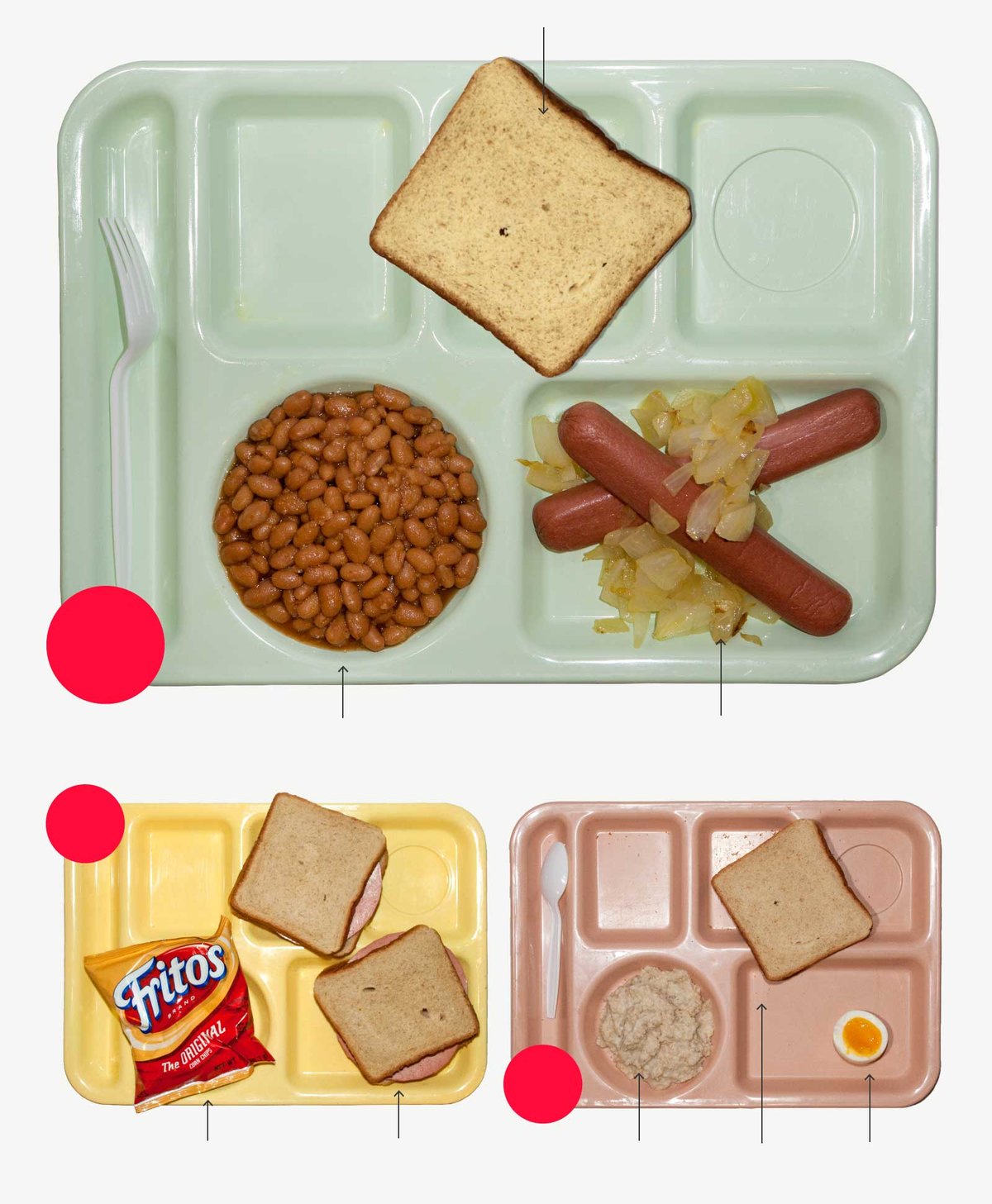 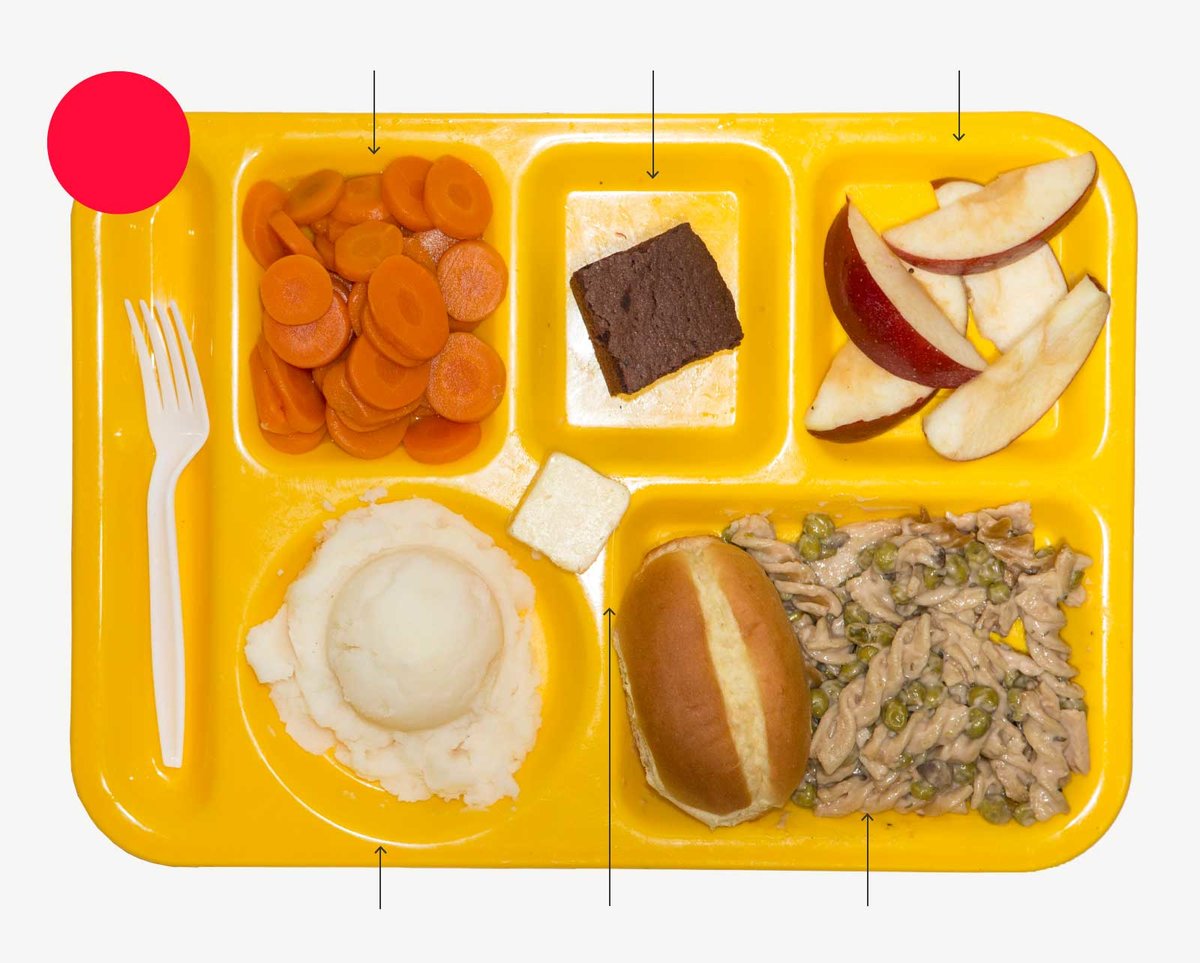 At this point, you may be recognizing that this article goes beyond fitness. This is just unhealthy. Not only is the calorie count too low for much of any human to function on, the food is also straight up trans-fat that was thrown in a blender and cookie cutter-ed into shapes like bread buns and hot dogs. Not surprisingly, Maricopa country was under the Jurisdiction of Sheriff Joe Arpaio. He was arrested for systematic abuse of prisoners in his jurisdiction, then shamelessly pardoned by President Donald Trump. We're going to stick to the gains in this particular article. If you'd like to learn more about this horrendous abuse, and do something to stop it, please visit The Marshall Project.

It certainly is possible to get strong eating this kind of food. It's not healthy, but we've all met those people who are pretty big and pretty strong and eat like shit. These guys aren't going to be getting very big, however they certainly can get pretty shredded. 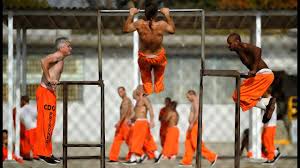 It's really more about hard work than anything else.

Want to get your calisthenics up? Sign Up for our NEWSLETTER and get cool workouts every week.

Alternatively, boost your calisthenic progress by using bands. Utilizing resistance bands will help you fast track those skills. From muscle ups, to extended arm planche, you'll be reaching your goals much faster if you use resistance bands.

I wrote this article to outline how it is prisoners are able to stay in shape, and even excel physically. Some of these guys really do have bodybuilder-tier physiques. My research brought forth a bigger problem, however. Prisoners are treated like a liability, and less like humans. If you’re interested in learning more about the inhuman activities, please follow the link:
https://www.themarshallproject.org/2015/07/07/what-s-in-a-prison-meal